My incredible life began in Los Angeles, California, the world capital of entertainment and legendary incarnation of the American Dream. The history of the future "Lucky Girl", alias Heather Elizabeth Parisi, starts here. Born January 27, 1960 in Hollywood. The “genius” of dance, as I have been called, is coming from my Mother, a professional dancer whose parents were born in Italy (Terravecchia, Cosenza).

I started to take my first dance lessons when I was only two years old. Since when I was 8 years old, I was so talented that I received numerous scholarships from the “Sacramento Ballet” of Barbara Crockett, from the “San Francisco Ballet” of Michael Smuin and from the ”American Ballet Theatre” in New York, where I was noticed by Michail Baryšhnikov and Gelsey Kirkland during my audition.

As in a movie

In 1978 at the age of 18, I made my first trip overseas to have some holiday in Italy, in Sardinia and Rome. As it happens in a movie, or in a dream, two days before returning home, I was noticed in a nightclub in Rome by a choreographer and a few months later, I was launched as the “Prima Ballerina” in a TV show called “Luna Park” hosted by Pippo Baudo with Massimo Troisi, Beppe Grillo, Tina Turner and many new artists. My first audition was in Giovanni Salvi’s office, where I danced on his desk. He was at that time the Director of Rai 1 There were also Elena Balestri, Pippo Baudo and the director Luigi Bonori. They all agreed: I was sexy, full of energy, ironic, blonde and with an irresistible “American accent”.

That was my debut, besides performing numbers during the entire show, I was dancing the opening number “Anche noi” by New Trolls in Luna Park.
Since then, newspapers and magazines started competing to have me on their covers.
The consecration as a TV Entertainer, singer/dancer is with the show “Fantastico” on Saturday Night, Prime Time. I will be the protagonist of this show for five editions. 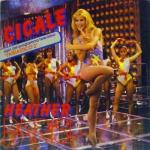 In 1983 I dance with Raffaele Paganini in the show “Al Paradise” directed by Antonello Falqui, where I hosted with Milva and Oreste Lionello. The show was awarded at the Montreaux Festival as best Television Show of the year.

‘My’ “Festival of Spoleto”

In 1986 I made my debut as an actress in the movie “Grandi Magazzini” with Nino Manfredi, Renato Pozzetto, Michele Placido, Ornella Muti, Massimo Boldi, Paolo Villaggio, Christian de Sica e Lino Banfi.
1986 is the year of ‘my’ “Festival of Spoleto”, an international big event with all the best classic and contemporary dancers from all over the world. Such as: Misha Van Hoeke, Daniel Ezralow, Alessandra Ferri, ISO (Momix), Elisabetta Terabust, Vladimir Devrianko, Julio Bocca, and Vassiliev.
Just for curiosity: Vittoria Ottolenghi, the famous and extremely severe Italian dance critic, did all that she could to let me participate at this Festival, fighting with all those who tried to oppose. At that time they considered me as too “Television-y” for this kind of kermesse, but in the end I greatly succeeded. I was honoured to have been on such a prestigious stage. They didn’t realize that my background was identical to theirs, Classical ballet!!
Later on, I was a protagonist together with “The New York City Ballet” and “Chorus Line” at the “Festival of Nervi”, with my “Heather Parisi Show”.

I became so famous, that all of the major Italian companies wanted me as their testimonial: Fiat, Parmalat, Swatch, De Cecco, Findus, Ferrero, Standa, Balocco, Bassetti and Ferrarelle.
In 1987 the “molleggiato” alias Adriano Celentano, wants me as partner in the show “Fantastico 8 ” and “Fantasticotto”.
Then I hosted “Stasera mi butto”, three editions of “Serata d’onore”, “Pronto Topolino”, “Una Sera al Luna Park” e “Ciao Weekend”. I was dancing and singing in all of these television shows.
During all those years, I never stopped for a while and I accumulated a great success. And not just on TV. Besides doing my tours with “Io, io, io e voi” around Italy and Africa, and travelling to Spain and Germany guesting on important Television programmes, my first record “Disco Bambina”, remained at the top of the charts as Number 1, for over 2 months, winning a Gold record. I obtained two more Gold records with “Cicale” and “Crilù”. I interpreted many other records like “Ceralacca”, “Ti Rockerò”, “Dolce Amaro”, “Livido” e “Pinocchio”, written especially for me by Pino Daniele.

Thank you to Vittoria Ottolenghi, Julio Bocca danced a Tango with me on my TV Show.

The prestigious Gala of “Telegatti”

In 1989 I’m the “queen” in “Stasera Lino”, with Lino Banfi and I dance with Steve La Chance. In May I accepted the invitation from Fininvest and I made my debut on Canale 5 with Mike Buongiorno hosting the prestigious Gala of “Telegatti”. It was the first time that this show was hosted by a Television entertainer from their rival the RAI.
During the same year, I’m hosting with Lello Bersani at the “Grolle d’oro” and with Fabrizio Frizzi and Giancarlo Magalli at “Saint Vincent Estate ‘89”. Then with Johnny Dorelli I presented “Finalmente Venerdì” and I recorded the scandalous “Livido”.

In 1990 I hosted the show “Buon Compleanno” to celebrate the 10th anniversary of Canale 5 with Corrado, Gerry Scotti, Raimondo Vianello and Maurizio Costanzo.

I’ve always loved fashion and I had the fortune to have been always sought by top Italian designers. Gianni and Donatella Versace dressed me for every appearance on TV throughout 1988 to 1991, plus one of their legendary “couture dresses”, is displayed in a famous museum in New York.
In 1991 Valentino chose to dress me as his “only” television personality. Then there will be Giorgio Armani, Alberta Ferretti and Roberto Cavalli.
At that time, it was unheard of, someone on Television wearing “Famous Designer” clothes.

In 1992 I worked for one year in Spain with Telecinco in the show “Vip 92”.
I came back one year later and I presented with Giorgio Mastrota, “Bellezze al Bagno” directed by Gino Landi. For the same show I recorded the song “Magicalibù” written by Zucchero.

On the 20th of July 1994 I had my first daughter, Rebecca Jewel.
I really didn’t want to go back on Television immediately but I had such an incredible offer with the show “Una Sera al Luna Park” again with Pippo Baudo.

For two years, I totally dedicated myself to a few experiences in the theatre. I acted in a the musical called “Women of Pleasure” by Barbara Alberti, where I was tutored by Franca Rame and was on stage in Milan with Marisa Berensen, Clorinne Clery, Anna Kanakis, Carmen Russo and Franco Oppini. I was also in a show which did the box office record of the season in Italy, called “Letto a tre piazze” with Zuzzurro e Gaspare.

In 2002 I recorded a new version of “Disco Bambina” and I presented “Zecchino d’Oro” obtaining an incredible audience record. At Christmas time I’m on RAI in “La Canzone del Cuore” and in the morning in “Natale con Topo Gigio”.

In 2003 partecipated in “Domenica In” with Paolo Bonolis and I danced to the choreography of Marco Garofalo. In that same year, I participated as guest star in the soap opera “Un Posto al Sole”.

2004 is another year full of success for me. “Domenica In”, my new CD “Heather Parisi, Le Più Belle Canzoni” and I was in the jury of “Miss Italia”, where I created for the first time my own choreography dancing and singing with the girls participating in the event.
I’m a guest on “Grande Fratello” and “Il Cielo è Sempre Più Blu” hosted by Giorgio Panariello.

In 2005 I’m a guest again on “Domenica In”, “Verissimo”, “Le Iene”, “Grande Fratello” and in the jury of “Ballando Sotto Le Stelle” besides being a special guest host for “Affari tuoi – Speciale”.

In the same year, Vittoria Ottolenghi asked me again to dance at the prestigious “Todi Arte Festival”.
This was another really big honour and I accepted without any doubt.

I danced to the live music of Avion Travel and the choreography of Veronica Peparini who, besides doing choreography around the world, will become even more famous on Maria de Filippi’s show, “Amici”.

Like many an eclectic and creative artist, I have always loved writing, as I do reading.
In 1997 I began writing my first film script, an inspired autobiography entitled “The Life of Catherine”.
Then I began to study filmography in Milano.
This project after being revised, would become “Blind Maze”, a movie entirely written, screen played, produced and directed by myself and presented at the 65° Mostra Internazionale d’Arte Cinematografica di Venezia 2008.

In 2009 I created my own blog www.heatherparisi.com.
In 2009 I launched my personal fashion brand HPeace.

On the 22nd of May 2010, incredibly at the age of 50, I became a Mother again. My precious twins, Elizabeth Jaden and Dylan Maria and I decided to follow my beloved Umberto Maria Anzolin to a new city far from away from Italy.

THE MAN OF MY LIFE

Since 2011 I have been living in Hong Kong, the city of my dreams. I love to travel around all South East Asia and to discover new way of living.